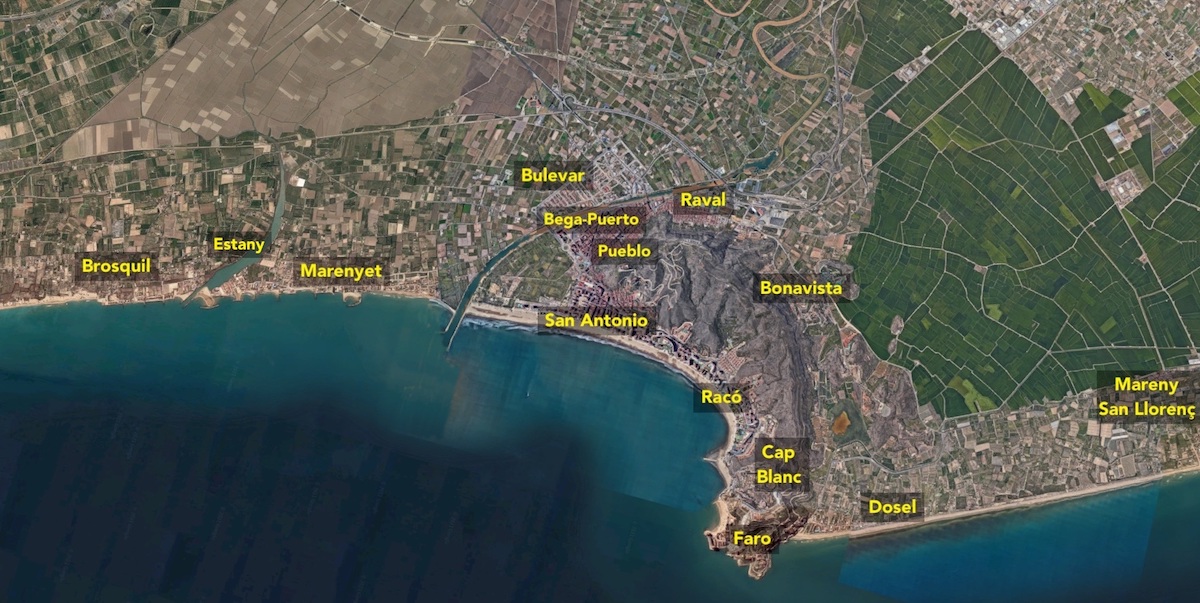 The city of Cullera is made up of different neighborhoods and areas, each one with different charms and possibilities.

Cullera areas can be classified into the following:

The Center / The Villa

Coming down the mountain, in the center we find main streets such as Paseo Dr. Alemany or Diagonal del Pais Valencià, on whose sidewalks we find all kinds of businesses. It should be noted that on Thursdays the municipal street market is set up in Paseo Dr. Alemany.

Key buildings in this area are the town hall (town hall), both the old and traditional, which has now been converted as a point of attention to the citizen as the new town hall, more focused on administration tasks. We also find the church of the saints juanes and the municipal market where, traditionally and to the present day, basic products have been purchased from day to day.

Extending the town towards the sea and towards the river is the bega area, adjacent to the river port, and giving way to the Xuquer boulevard on the other bank of the river.

The area of ​​the bega was the extension of the traditional town where we currently find more recent constructions such as buildings of more heights. In this area live the people of the city themselves, working-class families, dedicated to the different sectors of activity that are in the city and its surroundings.

In this area we find public buildings such as the health center, the house of culture / library, the municipal market or the port facilities.

Continuing towards the river, in it we can find moored fishing and recreational boats and take a pleasant walk through the river port reaching the beach and mouth of the river, which is called the breakwater.

The breakwater is on the margin of a still unbuilt rustic area which has been the target of several urban development plans to raise both residential and hotel buildings and a marina. After several years still, and since the approval fell before the financial crisis of 2008, to this day it does not have any definitive plan.

Also at the foot of the mountain, but sheltered from the sea and behind it, we find the most traditional neighborhood next to Sant Francesc. It is about El Raval, an area of ​​town houses, some of them centuries old.

The Raval area begins where the church of El Raval is located, a few meters from the iron bridge, and which connects with Valencia and Sueca streets. Valencia Street is the main road that runs through the Raval and connects all the streets that go up to the mountain.

In the raval we find some local facilities such as the soccer field, the municipal sports pavilion, the Raval health center or the cemetery.

At the exit from Cullera to Valencia, the Raval borders the industrial estate area, the area of ​​large shopping areas, restaurants and cinema, and the train station. 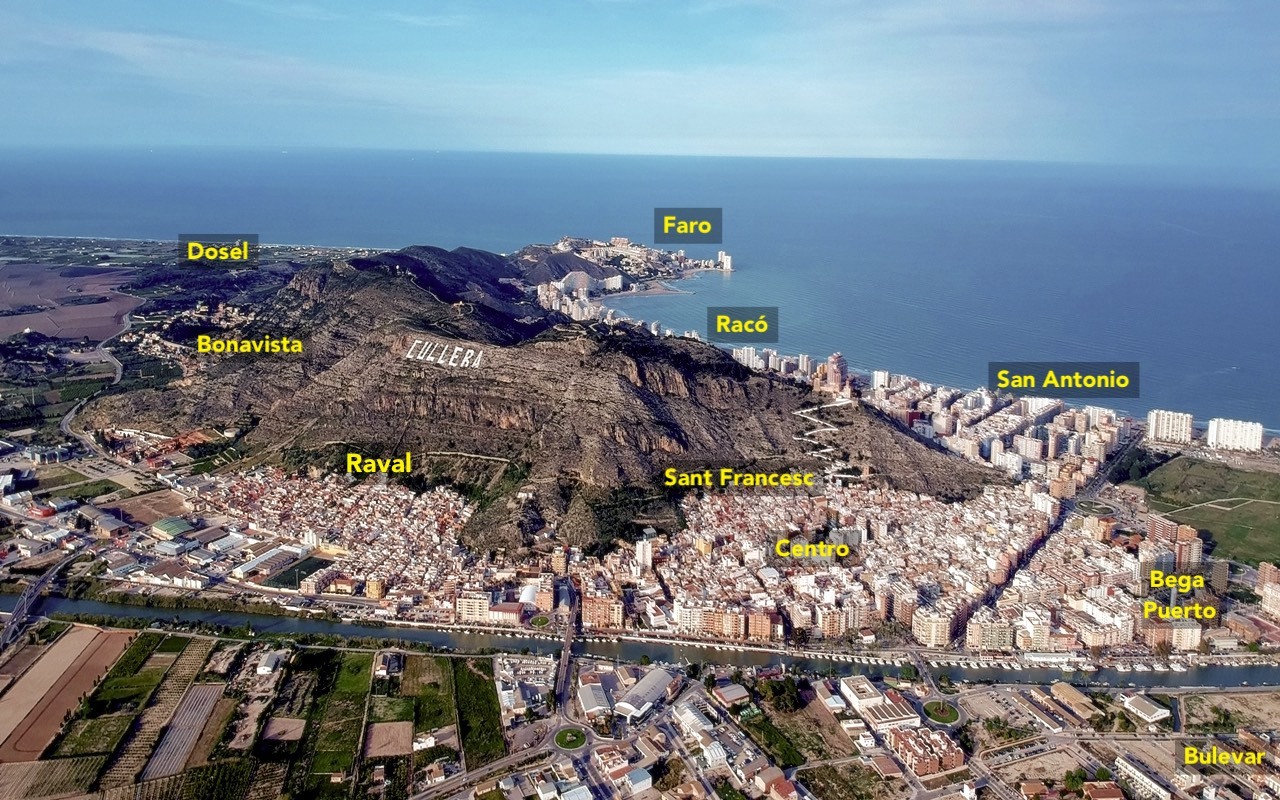 Aerial image of the raval (left part at the foot of the mountain) and center, port and bega (right)

The city's maritime neighborhood, a mix between the traditional part at the foot of the mountain and the most recent and touristy on the beachfront.

Tourist area par excellence of second home that extends along the beach, from San Antonio and to the Lighthouse.

In this area we find buildings on the beachfront along the promenade, and towards the foot of the mountain other constructions such as townhouses and the Santa Marta camping area.

Likewise, we find bars and restaurants, some of them open only during holidays and holidays.

Very quiet area in winter and very lively and active in summer.

Practically a district in an idyllic area, surrounded by the sea, the Cullera lighthouse is one of the most emblematic areas of the city.

Named for its lighthouse facility that warns sailors of the rocky outcropping of the coast, this area is considered touristy although it is true that more and more citizens live in this area throughout the year.

It is an ideal area in which families spend the summer during the summer or for weekend getaways, as it is quieter than other more crowded areas.

Easy access to the beaches of the olive trees, the canopy and the cove between the rock outcrops. It is also an area where you can practice scuba diving, snorkelling and fishing.

Route of the beaches from Dosel to Cap Blanc

Natural enclave to the north of the city that is part of the Albufera park where we find the most "wild" and less crowded beaches in the city.

Next to the lighthouse, it is a rustic area in which we find little urbanization and many country houses and chalets very close to the beach area.

In the northern part of the canopy, and bordering the town of Sueca, we find the hamlet of El mareny de San Lorenzo, a small and familiar traditional town of houses on the sides of the road that goes to Valencia.

Quiet place and close to the beach.

Sheltered from the sea winds by the mountain, we find this modern urbanization of chalets at the foot of the mountain and with views of the rice fields and the marsh, and the water park.

Residential and quiet area in which a few years ago cave paintings from the first prehistoric settlements of the city were found..

One of the most exclusive areas that we find when crossing the Jucar river to the south.

It is a recent urbanization based on the situation of the old chalets and country houses that were in the area a few meters from the beach. Today we find an urbanization with independent chalets and modern townhouses in which families live both in summer and throughout the year in a privileged, quiet area and a short distance from the town.

We also find various leisure options such as the surf school and different renowned restaurants on the lake side, with spectacular views.

Continuing to the south, and crossing the lagoon of El Estany, we find this rustic environment in which the district of Brosquil is located next to the beach.

In the Brosquil area we find both country houses and independent chalets along the different paths as the Brosquil population center. This is a quiet area and mainly for rest for the summer and weekends, located in a rustic and natural environment a few meters from the beach area and bordering the town of Tavernes.