Practically at any time of the year it is easy to enjoy some of the festivities that take place in Cullera, some of them typical of the city and the region.

In this article we are going to review some of these festivities in which you can enjoy the city and its people.

Party par excellence in Cullera and throughout the province of Valencia, born from the festivities dedicated to celebrating the end of winter and the arrival of spring.

The Fallas are currently a festival lasting several days in which the different Fallas commissions from the city's neighborhoods plant their monument for later burning 3 days after the "plantà".

During those three days, the festivities take place in which the falleros gather in their houses and in the different acts such as the plantà, the awards ceremony, the offering or the "cremà", the final act in which the faults are reduced to ashes to give way to spring and a new year.

The origin of the faults is located in ancient times in which wood craftsmen and other professions burned the material remains of the work to make room in the workshop at the end of winter. Over time, these remains took on an artistic form until they reached the current monuments with their ninots, art in capital letters in which Fallas artists work all year round. There are not a few tourists who are surprised to learn that these works of art that have been worked on for a year are reduced to ashes in just 3 days from their exhibition, it does not seem to make much sense, but that is how these parties are so magical.

In addition, on the days of fallas there is no lack of music from the bands, food, mascletàs and fireworks, which accompany the festivities at all times. 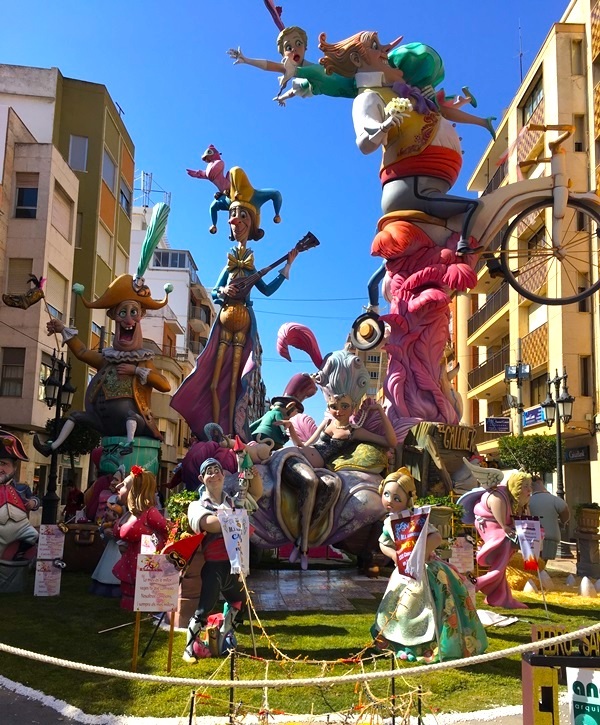 As in many towns in Spanish territory, Holy Week is awaited and celebrated with emotion in Cullera.

Starting on Palm Sunday and continuing the week with the processions, reaching Good Thursday and Good Friday, days of recollection to end with Easter Sunday in which family and friends gather to celebrate the day either in the countryside around a paella or in restaurants near the beach, since it is usually a time when good weather and pleasant sun are normally enjoyed.

The second day of Easter, the Monday that follows Easter, also being a holiday, is celebrated with friends and family and during the afternoon the traditional "xocolatà" takes place as a snack.

After the week, the city festivities arrive, a week full of events to celebrate life in Cullera and its heritage and history.

Officially, the festivities begin with the traditional baixà in which the patron saint of Cullera descends the mountain from her usual residence, the castle of Cullera, to the church of Santos Juanes, where the faithful can visit her throughout the week.

In those days the figure visits the different neighborhoods of the population in the auroras and the processions.

In addition, there are cultural events such as talks, exhibitions, concerts and informative meetings of different associations for practically all tastes.

Although it is not a celebration in itself, summer acquires an important character in Cullera, as it is one of the national and international tourist destinations of relevance, both for tourist visitors and for those who have their second residence in Cullera, of which mainly enjoyed in summer.

Throughout the summer you can enjoy different acts and cultural, sporting, gastronomic, festive events, etc. After all, it is the busiest tourist season of the year, an ideal opportunity to leave good impressions on all visitors.

Valencian Day, October 9 is a day dedicated to celebrating the culture and heritage of the Valencian region. It is a festivity in which different acts of a cultural nature are organized dedicated to spreading the richness of Valencian history and culture.

In Cullera there are events organized by the town hall on the same day.

Christmas, end of the year and the wise men

The Christmas season is also celebrated with effusiveness in the town, an emotional time of reunions with family and friends.

In Cullera, Christmas Eve is celebrated with relatives and then with friends on a night that can be long, giving way to Christmas Day.

On New Year's Eve it is also a tradition to celebrate it with friends to usher in the new year with joy.

And for the little ones, the day of the kings is celebrated with the traditional cavalcade of their royal majesties. Then the children are surprised with gifts, with the toys they have been looking forward to.